Tribute to the Mighty LED ZEPPELIN

The story so far:

In 2023 Fred Zeppelin have reached 30 years together.

Well, to be precise, Steve Black (that's me on drums)

formed the band 30 years ago with three mates.

Our original singer Rob Bloomer left after 2 years so

Steven Gale replaced him, and approx 11 years ago

left the band.  We really thought that would be the end but we

got very lucky and found the dynamic duo of Mark Cresswell

on bass and Elliot Gavin on guitar. We're a bit like Trigger from

'Only Fools & Horses' talking about his broom (that's if you are

old enough to remember!). Anyway, we think 30 years is an

achievement that we're all proud of.

During their time together the band are honoured that

three of their gigs and John Bonham’s son, Jason,

even jammed with them on stage. It must surely also be

the best recommendation any band could receive and

It's worth taking a camera with you, as you don’t know who could be

standing next to you. In the audience have been MAGNUM’s

The band were also invited by Led Zeppelin’s Jimmy Page

to attend a charity event of which Jimmy is a patron.

They were thrilled to meet and chat with the legendary guitarist.

Also at the party were Roger Daltrey, Julian Lloyd Webber,

According to one of Kerrangs reader's polls, FRED ZEPPELIN

were among the top ten best live bands to see. Quite an

achievement, as at the time they were the only tribute

band listed in any category.

Fred Zeppelin are real fans and formed ‘The Fredz’ out

of their admiration and love of Led Zeppelin’s music.

As their name suggests the band don't take

themselves too seriously, they know the praise

and Bonzo. And, the Fredz will still continue

with their tradition of honouring the music of

Led Zeppelin and not dressing up to imitate

them. Please keep in mind they are not a 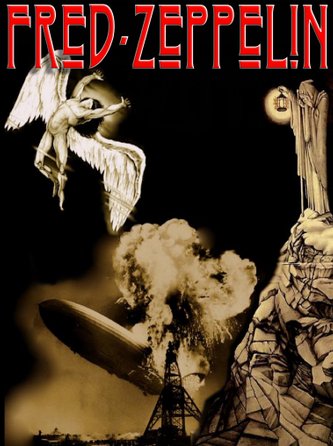 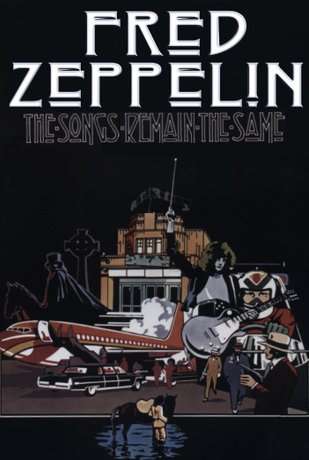 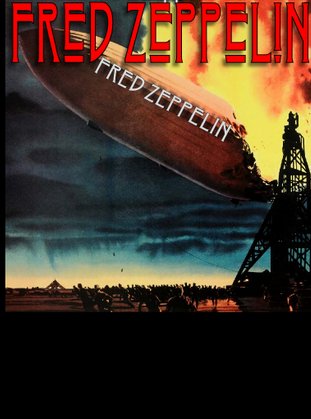 Jimmy Page autographed one of our flyers for Blackie. 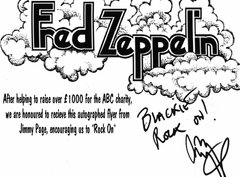 Do you remember petuli oil, cheesecloth, tie-dye T-shirts, desert boots, loons and tank tops. Do you still wear them?

If the answer to any of these questions is yes, the chances are you must be the proud owner of at least one Led Zeppelin album.

Let ‘THE FREDS’ take you back in time to those heady days of flower power, Kevin Keegan perms, flared jeans so wide it took two paces before they moved, and shirt collars long enough to tuck into your under-pants.

Dust down the afghan, light up the joss sticks and let ‘FRED ZEPPELIN’ re-create the atmosphere of that great era by playing all the classic tunes of the greatest rock band ever ‘LED ZEPPELIN’.